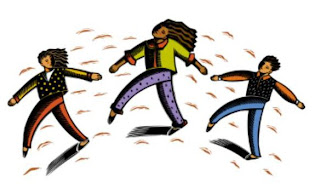 There is a phenomenon around the world called the “flash mob”. The first one I saw was a few years ago done in a Belgian train station to a remix of Julie Andrew’s Do-Re-Mi.
The next big one to catch my attention was the Black Eyed Peas version of Got a Feelin’ for Oprah’s anniversary in . 20,000 people turned out for that one.
In May, 2010 Eurovision had a song contest for the world’s largest flash mob dance held simultaneously in 10 cities across . Madcon won with the song GLOW and the choreography was put up on YouTube to learn. I decided to make this my final unit for the year and each class chose a song to choreograph and I taught the entire elementary school of 650 students the Eurovision version of GLOW.
Sections 3 and 4 were a bit too challenging for little ones so I simplified it using a couple of moves from Oprah and 2 line dance steps. If you do it, add your own flavour or get some talented students to work with sections 3 and 4.

Here is my abbreviated list on how to choreograph a successful school Flash Mob Dance: 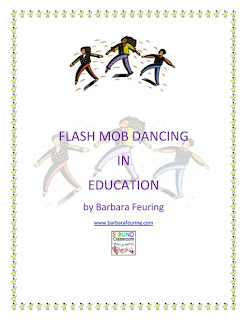 If you would like to organize a Flash Mob dance in your school, you might be interested in purchasing my recent 12-page guide titled "Flash Mob Dancing in Education" from TeachersPayTeachers.com.  My guide will provide you with direct links to popular Flash Mob songs as well as step-by-step choreography moves.

If you are located in Greater Vancouver, BC, I am also available for a negotiable fee to organize or assist with your school event.  .

After a long and successful career in teaching music in Western Canada; doing music consulting; and running an educational supply store; an opportunity presented itself to try international teaching in Cairo, Egypt. I spent an interesting 4 years teaching music in Cairo before following another opportunity to Riyadh, KSA (Saudi Arabia), where I taught music at the American International School of Riyadh for 5 years. I officially retired from teaching in June, 2011 and returned home to Surrey, BC, Canada where I am pursuing several ventures, but still never far from music and education.

Dropbox allows you to sync your files online and between your computer devices automatically. Also great for teacher collaboration. Follow this link and get 2GB free space plus 250 MB free.